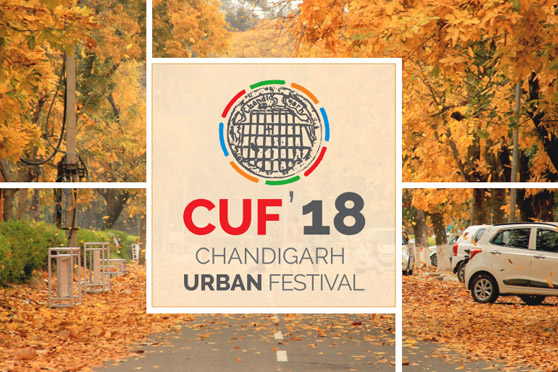 Chandigarh Urban Festival -2018; OUR CITY OUR CELEBRATION was launched in February 2018 and the finale was celebrated on 25th march. The UT Administrator, H.E, Sh. VPS Badnore gave tremendous support to the idea when it was at the initial stage and the Chandigarh administration facilitated the event with enthusiasm and provided all logistic support needed to bring together the city in bonding and celebration for the event. The event was conducted in partnership with Ministry of Housing and Urban Affairs (MoHUA), National Institute Of Urban Affairs (NIUA) and UN Habitat.

Whereas the Cyclothon provided an invigorating environment at the start of the day, the highlights of the finale were the Carnival and the Sky Lantern activities that followed. The Carnival appropriately called The Open Hand March, was flagged off by the UT Administrator, H.E, Sh. VPS Badnore himself and what followed were some spectacular and colourful performances, that included a mix of folk, classical and popular. The cultural diversity of citizens including a group of specially-abled was the cynosure of all eyes. After a multitude of performances at the Tourism Centre that included a classical instrumental, an international award winning, powerhouse kathak performance and many regional dances, the Sky Lantern activity conducted at the People’s Plaza left everyone spell bound. Families, student groups and everyone present were collectively hooked into the beauty of the moment and many were seen squealing with delight, clapping and cheering as their sky lanterns went up into the night sky.

The colleges that participated were: IKG PTU campus, Maharaja Agrasen University, GD Goenka University, Gurgaon and HINDU College, Sonepat. The best entries of above competitions were exhibited at the venue of the conference for everyone to see.

CONFERENCE: Carving a sustainable future: Chandigarh Region. IKG PTU campus Khunimajra in collaboration with ACT! Chandigarh hosted this conference at the Government Museum and Art gallery sector- 10 , Chandigarh. The most illustrious architect of the Chandigarh Region, Ar SD Sharma was the chief guest at the occasion and Ar Kapil Setia, the Chief Architect of UT, Chandigarh was the guest of honour.